Hello friends! Ernie here to tell you about our beautiful Sunday walk downtown! 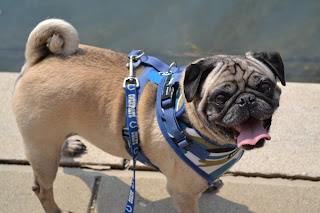 Mama decided we need to start walking to get ready for Mutt Strut, the annual benefit for the Indianapolis Humane Society where people get to walk with their dogs around the Indianapolis Motor Speedway! So since Sunday was such a nice day here, Eddie and I got to go with Mama, Dad, Sam, and Aunt Jess and Lilo downtown to the canals to strut our awesome pug stuff! Here's Lilo with her mama... 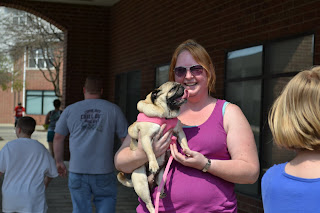 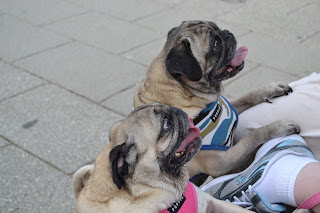 Please give me some of that chicken! I know you want to share! (Notice my handsome new Puppia harness!) 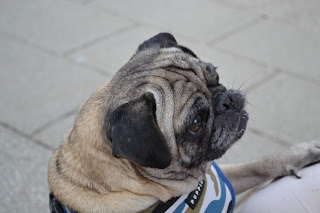 How can you resist this beautiful face? 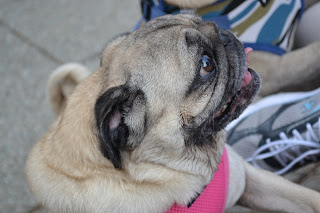 Eddie just hung out...and so did his tongue! BOL!!! 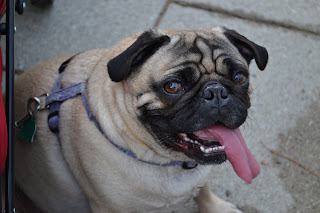 The canal is pretty cool. It was originally built in the 1800's, intended to be a major source of transportation through Indiana, but the project ran out of money and only 8 miles of the canal were completed! Indy has been rebuilding the canal as an attraction and the housing along the canal is very much in demand. One of the most awesome sites along the canal is the USS Indianapolis memorial. You may remember the story of the Indianapolis from the movie Jaws. The ship was sunk during World War II after delivering the atomic bomb to Japan and the sailors that survived the sinking were faced with sharks. 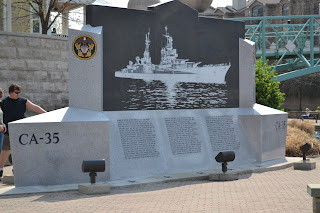 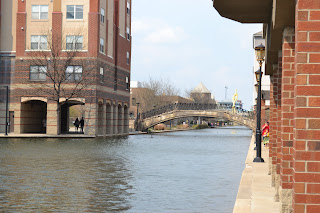 Some of the trees were flowering which made the view even prettier. 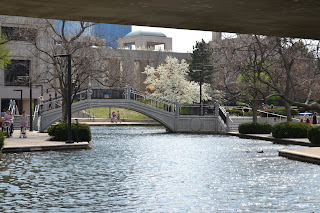 In the summer they have gondola rides in the canal! 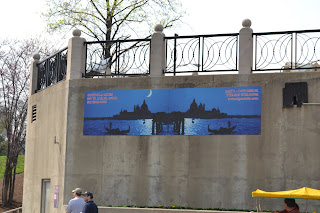 We saw these fish in the water, but Mama wouldn't let us get too close! 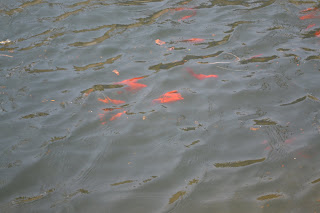 Mama really likes this picture of the Indiana History Center. 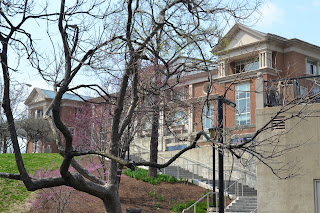 That's the tree we sat by to eat our snacks. 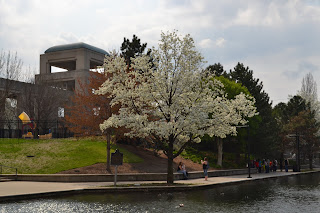 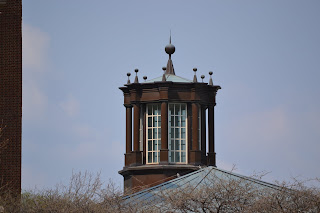 This is another memorial along the canal. It is the Medal of Honor Memorial and it is located right across the water from the Indiana State Museum. 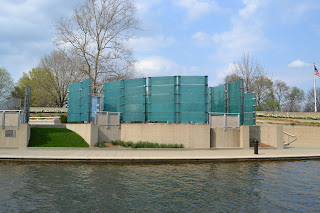 A view of downtown... 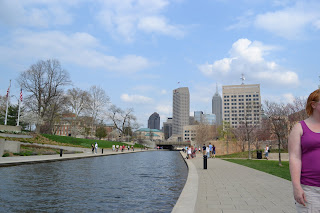 These mastodons were guarding the Indiana State Museum. I didn't think they were very scary though! 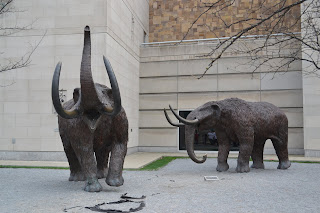 The building on the left is the NCAA Hall of Champions. The NCAA is headquartered here in Indy! The building you can see a little of on the right is the State Museum. 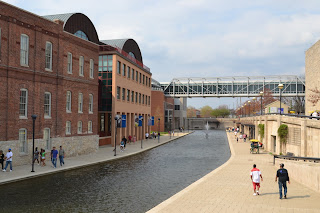 Phew! That was a lot of walking we did today! I was one exhausted pug!!! 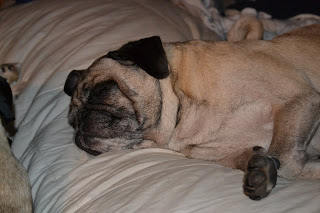 Pug hugs and kisses!
Ernie and the Pug Posse
Posted by Pug Posse at 6:57 PM

What a great walk! We didn't get a chance to see that on either of my visits! Guess that means I need to visit again!

Hey, Big Ern.....I never been down there; looks like a good place fer a stroll, but do they allow PBR on the canal?

Anyhoo.....my folks have walked the canal but not me. I'm gonna hafta git 'em tuh take me next time!

Punchy: Yes, you do need to come back!!!

Hank: Pretty sure you could have some PBR down on the canal ;-)

Those were great pictures! I never knew Indianapolis had such a lovely spot . . . but then again, I have never been out of CA in all my 21 MONTHS of living.
Love Noodles

We will have to go there on our next visit to Indy! 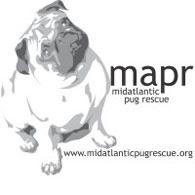